The Pig Wizard is a fun online slot with a fantasy theme. Modelled on a series of books and movies about a boy wizard, this slot has a light hearted feel and lots of extras. The Pig Wizard has the usual five reels and twenty fixed paylines. It has a decent wagering amount despite its fixed paylines, and will appeal to players of most budgets. Remember however that the higher you bet on the twenty fixed paylines, the more action you will see and the more likely you are to stand a chance of winning the progressive jackpot.

The Pig Wizard used to be called Harry Trotter, but no doubt a certain author’s influence ended that quite quickly. The game still has the familiar Hogwarts atmosphere however, with loads of black and bright neon colour. This is a very pretty slot, with loads of effort having gone into the design work. The background to the reels is lots of neon blue swirls set on an inky black night time forest scene. All the buttons at the bottom of the screen have been designed to be theme based as well, with the spin button being a black cauldron bubbling over with luminous green gunk.

The Pig Wizard doesn’t have much of a plot, other than being set in an obviously magical world full of potions and wizards in this real money slots game. Not all of the symbols are theme based, but the bottom ones that have been taken from a deck of playing cards have had a lot of design work put into them. Done in a font that will be familiar to anyone who has watched the movies about the boy wizard, they are all bright colours with swirly magic around them. The rest of the symbols are a wizard’s hat, a spell book, a bag of cash and gold coins.

The Pig Wizard himself is wild, and will take the place of any other symbol in the game except for the bonus icon. 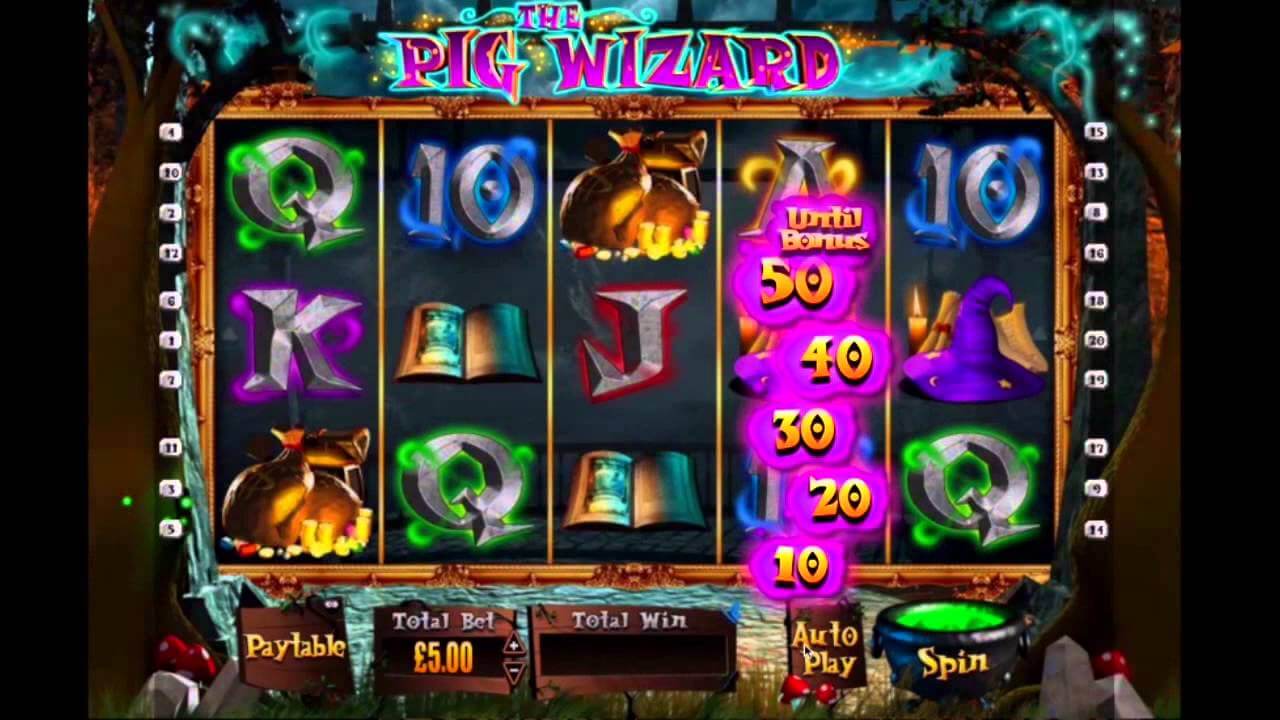 The bonus icon can be found on reels one, three and five. Three of these will take you to a screen where you get to choose from four bonus games.

Squeal or no squeal. This game is basically a pick me where you get to chose from one of ten spell books. If you feel that the prize you chose is not good enough you may choose again, but only up to five times.

Trail of magic. This is a game based on a board game. Roll the dice to move around the board and collect prizes. The game is over when you land on the green potion.

Magic Mirror free spins. Here you are awarded free spins during which all mystery mirrors can randomly change into matching symbols with the potential for big wins.

Progressive Jackpot. This one you can’t choose. It is awarded randomly from the Magical Map if you are lucky; nothing you can do will trigger it. If it does get awarded to you, you then get to play another game once you have finished with the jackpot.