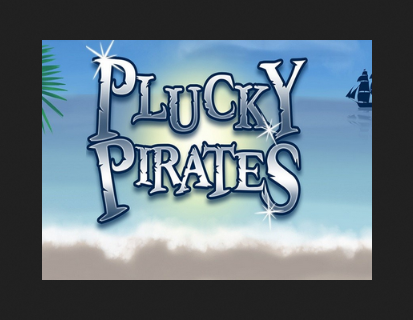 A rollicking soundtrack, part pirate shanty and part Korngold theme for a big-screen Blackbeard movie, accompanies the action on the Plucky Pirates slot game. Like all Netkan slots, Plucky Pirates is designed first and foremost to play on mobile devices, so it follows the standard Nektan template.

Two of a Kind can Win Prizes

Most Nektan slot titles require a minimum of three of a kind, starting on Reel 1, to create a winning payline, but Plucky Pirates is one of the few that needs only two of a kind, for certain icons. The ship, swords, chest and logo all start payouts for two matching symbols. The top prize the game offers, for five logos on one payline, is 2,500X the line bet.

For most other Nektan slot titles, the top prize is 1,000X, or even 500X, the line bet, so Plucky Pirates is special in this regard. However, the title has a maximum of only 9 lines to play, as opposed to the 15, 20 or even 50 paylines featured in some other Nektan titles, and the maximum bet is the standard 1.00 per line in the chosen currency. So on average, the winning potential of the different titles evens out.

This is a five-reel, three-row layout with no bonus extras except the Wild and Scatter symbols, with layout and controls optimised for play on smart phones and tablets. The unvarying nature of this format means the designers need to make the visual and sound qualities of each individual slot title appealing, as these are the only factors that distinguish them from another.

All the Trappings of Pirate Seas

The backdrop to Plucky Pirates slot is familiar from a hundred pirate tales; a desert island, featuring a pirate and a palm tree, with the invisible reels nestled between them. In the distance, two sailing ships ride at anchor offshore.

The slot’s symbols extend the theme. Low-value Poker symbols, 10 through to A, are fashioned from strips of map parchment, creased and ragged as if from long use. The A will deliver a win of 150X the line bet, if the player can line up five on one payline. The higher-value symbols, in ascending value order, are a bearded pirate, a pirate ship, crossed swords, a treasure chest and the Plucky Pirates logo.

A ship’s cannon embellished with the word Spins is the Plucky Pirates Scatter symbol, and as with most slot games, players need three or more anywhere on the reels to trigger a round of free spins. There is also a Wild, which as usual can complete winning combos with any other icons apart from the Scatter. In a final hat-tip to the pirate tradition, the Plucky Pirates Wild is a bright green parrot.

Although all Nektan titles are created originally for mobile play, the game plays just as well on fixed devices, so it is accessible via laptop or desktop computers too like craps at https://onlinecasinobc.net/craps. The game controls remain in position at the sides of the screen. The only difference is that players will uses their mouse or track-pad to work the controls, rather than the point-and-tap navigation possible on a touchscreen.